Although it’s been a while since Microsoft announced Windows 11 (and there have been several development versions already), it’s only been a few days since the first beta was released.

At first glance, the availability of a trial version should mean a more stable version of the operating system, but this does not mean that there are no problems. Of course, when the software is in beta, it means to expect bugs and issues. Here, it’s the switch from the Dev channel to the Beta channel that is causing some concern. And what’s the problem? System requirements for Windows 11, of course.

Take a look at the Windows Insider Twitter account and you’ll see complaints from many people having trouble switching from the Dev channel to the Beta channel. One of the issues people face is the system requirements for Windows 11.

There have already been many complaints about the hardware requirements Microsoft has set for Windows 11, in large part because they have phased out many fully-capable systems.

Microsoft explained to a Twitter user: Yes. Your hardware doesn’t meet the minimum hardware requirements, but an exception has been granted for the Dev Channel. 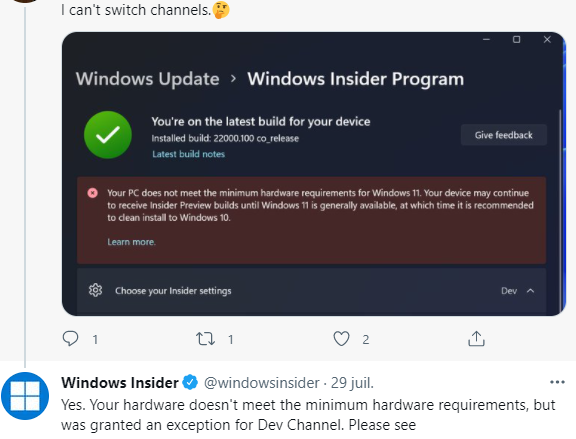 This shouldn’t come as a huge surprise, not least because Microsoft made this clear earlier. But for people who installed the Dev version of Windows 11 with enthusiasm only to find that the beta (and thus the RTM preview) didn’t work, this is a disappointing benchmark. For the record, Microsoft indicated that it will not be possible to bypass the system requirements for Windows 11.

This news came in a recent Ask Me Anything (AMA) session that was posted to the Microsoft Tech community. During the session, Microsoft Program Manager Aria Carley shares the news while discussing the deployment of Windows 11. She answers a question about devices that are not fully compatible with Windows 11. The user asks:

If we consider that the device is not fully compatible with Windows 11, will it be offered to upgrade via Windows Update?

So we’re talking about this new physical ground for eligible and unqualified devices. And we know we’re concerned that some may not qualify for Windows 11. But the reason we do this is to keep devices productive, have a better experience, and most of all, have better security than before so they can stay protected .

There is then a request to turn off backups that can prevent upgrades, and Carly says that group policy, although not recommended, can be used to bypass those blocks. But she adds:

This group policy will not allow you to bypass the Windows 11 Devices app. We will always prevent you from upgrading your device to an unsupported state, because we really want to make sure that your devices stay supported and secure

AMA videos are available on YouTube, and if you head to the sixth minute, you can hear related Q&A:

Switching channels on devices that are fully compatible with Windows 11 is not a problem.

In fact, moving from the Dev channel to the beta channel is something Microsoft highly recommends. In addition to noting that your feedback has the most influence in the beta channel, Microsoft also says it’s a good time to make the switch given the parity between Dev and Beta versions at the moment*: you can simply change your channel setting. It’s the same version at the moment, so if you want to skip the beta, now’s the time.

Well, this is the best time for Insider subscribers to switch from a Dev channel to a Beta channel.

You can switch from the Dev channel to the Beta channel very easily and enjoy the increased stability of the latest version:

Android apps will be available before the end of the year