The Canadian Space Agency, the University of Montreal and manufacturer Honeywell helped design and manufacture two parts for the James Webb Space Telescope, which launched on December 25. 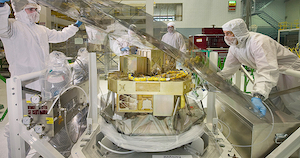 Scientists and engineers from the Canadian Space Agency and the University of Montreal co-designed Detector and micro-imaging device and near-infrared slit-spectrum imaging device telescope.

The Precision Guidance Detector (FGS) is used to guide the telescope during its observations, while the NIRISS Slitless Imager and Spectrograph (NIRISS) is used to observe galaxies and study the atmospheres and habitability of exoplanets.

According to the Canadian Space Agency, astronomers in Canada “will be among the first to be able to access and study the data collected by the telescope.”

The collected data should also allow studies and research on the first sources of light in the universe, the formation and evolution of galaxies, the life cycle of stars, as well as young stars in the solar system.

The Canadian science team for the Webb mission is being led by principal investigator Rene Doyon, University of Montreal, as well as Chris Willott, chief scientist for the Webb mission in Canada, and the Herzberg Center for Research in Astronomy and Astrophysics from the National Research Council of Canada. Researchers from other universities and institutes participate in the work.

The telescope will orbit the Sun 1,500,000 km from Earth. It will take the Webb telescope about a month to reach its destination.