The dark red region on the surface of the dwarf planet Pluto, nicknamed “Whale” or “Cthulhu macule” since its discovery in 2015, remains intriguing. Initial assumptions about the reasons for their existence have been called into question by a new study.

The New Horizons space probe, six years ago, revealed the existence of this “dark red equatorial region, (…), covered with a dark and unpolished matter, the origin and composition of which has not yet been determined,” states the study published in Icarus at the beginning of the month. This region, known as Cthulha, lies west of the “frozen heart” of Pluto.

Scientists have imagined that this very specific region of the dwarf planet was caused by the tholins. These are compounds whose presence can be explained by the chemical reaction between a color present in the ultraviolet light of the Sun, which may react through contact with methane particles present in Pluto’s atmosphere, described Nomirama. These tholens will also be present on Titan and Triton, the large moons of Saturn and Neptune.

The area in question returns a dark red color [@Nasa/AFP]

The puzzle has not yet been lifted

So the researchers wanted to reproduce these compounds in the lab under conditions similar to Pluto’s atmosphere, to make sure they reflected light in the same way that the New Horizons probe had recorded. However, the correspondence is not accurate. There are differences between spectra. 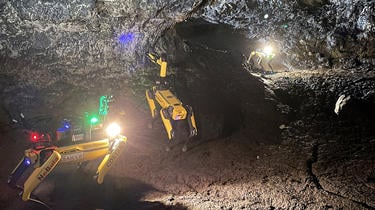 The study notes that “we cannot yet make a firm conclusion regarding the composition and surface properties of the Cthulhu area, in particular the fine chemical nature of the red matter.” Another phenomenon could be the tholin for it in action. New experiments must be conducted to clear this puzzle.