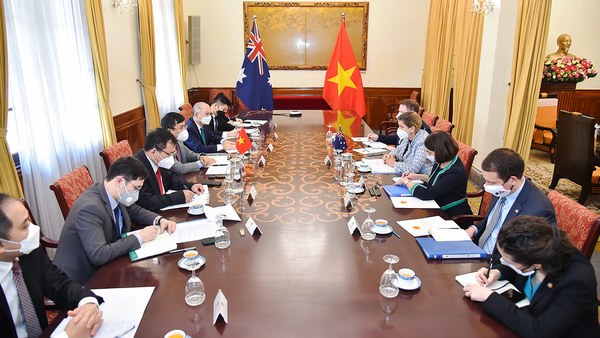 Katrina Cooper stressed that Australia has always valued Vietnam’s role and position in the region, and will continue its efforts to enhance strategic partnership between the two countries.

The two Deputy Ministers spoke highly of maintaining high-level liaison between the two sides and the consistent and flexible deployment of bilateral cooperation mechanisms. Economic and trade cooperation is a bright spot in bilateral relations, with $ 12.4 billion in trade transactions released in 2021, an increase of almost 50% per annum.

The two sides discussed the East Sea issue, respecting international law, especially the 1982 United Nations Maritime Law and other global and regional issues, and insisting that disputes be resolved peacefully.

As part of her visit, Katrina Cooper paid a courtesy call on Le Hoy Trung, chair of the party’s Central Committee External Affairs Committee; Worked with Action ASEAN SOM President Vu Ho; Attended a seminar on Mekong at the Diplomatic Academy; Meet with Australian and Vietnamese companies and partners. -VNA