In recent years, the default Windows emulator has been the Windows console host, conhost.exe, which means that shells like Command Prompt or PowerShell will open inside.

Windows Terminal debuted during the company’s Build 2019 event and is now an easy-to-use and customizable tool. Command line fans can play with the lines or activate modes to recreate that mysterious CRT feeling if they so choose. Most useful, in recent years, tabs have been added as well as a user interface to avoid messing with JSON files to configure preferences.

During Microsoft’s annual Build Conference for developers, the publisher introduced Windows Terminal 1.0, the first stable version of a new command-line interface for Windows designed to be the central location for accessing environments such as PowerShell, Cmd, and the Windows Subsystem for Linux (WSL). It offers multi-tab support along with customization for developers who want to polish their Terminal app with themes or extensions.

Microsoft has made it clear that Windows Terminal is a modern, fast, efficient, powerful and productive application for users of command line tools and shells like Command Prompt, PowerShell, and WSL. Its main features include multiple tabs and panels, support for Unicode and UTF-8 characters, a GPU-accelerated text rendering engine, as well as custom themes, styles, and configurations.

See also  Why the release of December 12 is reasonable

The default terminal is the terminal emulator that launches by default when you open an application from the command line. Since the dawn of Windows, the virtual station emulator has always been hosted by the Windows console, conhost.exe. This means that shells like Command Prompt and PowerShell have always opened in the Windows console host. For a long time, users could not easily replace the console host. There were certainly third parties who plugged in the operating system to make this possible, but it was never supported. We are now unlocking the feature to allow other stations to be set as default, including the Windows one. 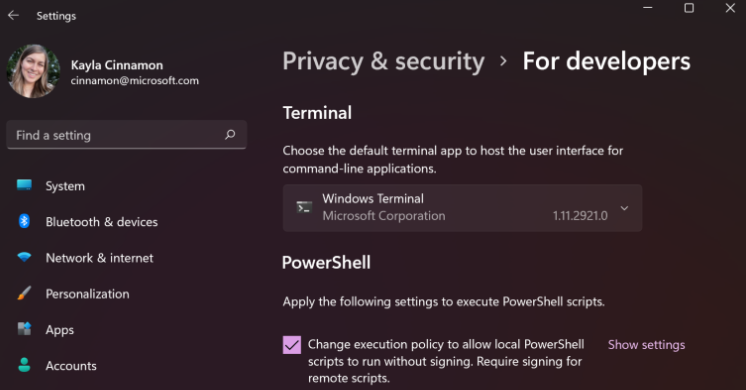 During 2022, we plan to make Windows Terminal the default experience on Windows 11 devices. We’ll start with the Windows Insider Program and start walking through the loops until we reach everyone on Windows 11. We’d love to receive your feedback as we work on it to help eliminate any bugs and ensure everyone has a great experience. with Terminal.

Windows Terminal 1.9 delivered with Quake Mode! Quake mode allows you to quickly open a new Terminal instance from anywhere in Windows by typing Wins + “. The Quake window will appear on the top half of your screen and can be removed easily using the same keyboard shortcut. If you’d like to further customize the way you can invoke Terminal, Microsoft has made documentation available that you can refer to to find the new features that have been added to public invocation.

See also  Martian winds can detect what's beneath its surface

Windows Terminal comes with a lot of different actions available to you. Most of them include default keyboard shortcuts and the editor now gives you the ability to add your own keyboard shortcuts without removing existing shortcuts using the Settings user interface.

From this version, you can configure Windows terminal to restore previous tabs and panes after restart. This can be activated by “firstWindowPreference” specified in Continuous WindowLayout in the general settings of the settings.json file or in your settings on the start page.

Windows Terminal now supports full transparency on Windows 11*! Instead of using acrylic, you can have full transparency just like the transparency variation available on the original console. An improvement over the Windows console host in this app is that the text will remain opaque while the background will become transparent. This allows you to be able to read your command prompt without losing contrast!

What do you think of Windows Terminal?

What is your favorite emulator on Windows?

Uncharted: Legacy of Thieves Collection – The collection presents a launch trailer and a release date!

NASA: Towards a shortage of astronauts?