Starting this month, Microsoft Defender and Microsoft Edge on Windows 10 will block these types of apps by default. Users who want more control over which applications can run on their computers have the option to turn off the setting, but that means missing out on an important precaution.

Microsoft announced the change in a Windows support article:

These applications usually come from online sources, but they can also be run from network locations or USB flash drives. As the name suggests, they are unwanted as they can be malicious and can cause damages like data loss. This is exactly why Microsoft added the Unwanted App Blocker for all Windows 10 in version 2004 (May 2020 Update). However, the security function was deactivated by default and had to be activated manually:

In the Windows 10 May 2020 Update, we added blocking a potentially unwanted app for all users using Windows 10, but customers who wanted to use it still had to enable it.

Speaking of what many considered an oversight, Microsoft said:

Starting in early August 2021, we will start turning it on by default to help keep your systems at peak performance. If, for any reason, you want to turn it off or turn it back on again later, you can do so by going to Windows Security App > App and Browser Control > Reputation-based Protection.

With protection in place, Windows 10 users have an extra layer of security against malware and other damages.

What other items have been added by Windows 10 May 2020

For the record, here are the new features and improvements that accompanied the availability of this release:

As of this release, Windows 10 uses Windows Subsystem for Linux Version 2 (WSL2) as the default version, which has several improvements. In the previous version, WSL1 used a Linux-compatible kernel that translated Linux system calls into Windows kernel-compatible calls.

WSL2 for its part now uses a true Linux kernel that allows for better file system performance as well as compatibility for a wide range of Linux software.

One difference also lies in updates: when Microsoft releases a new Linux kernel, it will be automatically updated by Windows Update.

The Windows Indexing Service is responsible for indexing all Windows 10 documents and files that appear in searches with Windows Search.

As of the May 2020 Update, Windows 10 uses a new algorithm that checks for high disk activity and, if detected, automatically slows down the Windows indexing process.

Based on this, we introduce an algorithm that detects high disk usage and activity, so that it can better identify peak usage hours and manage the indexer accordingly. We are also making changes for developers to prevent searches in certain project repositories and folders to improve disk usage.

Other Windows Search improvements include:

For those with a slow connection, Windows 10 now offers better control over how much bandwidth Windows Update uses. You can now specify download speeds as a percentage of bandwidth or a specified number of megabits per second.

Windows 10 Task Manager will now display the type of disk installed on the computer. For example, distinguish between a hard disk drive and a removable device.

One of Microsoft’s long-standing requests for Task Manager is to add support for temperature monitoring. With the current version, the publisher is making progress in this direction. If you have a dedicated GPU card, Windows will now display the current temperature in the Performance tab.

You can now sign in to your Microsoft accounts using Windows Hello. This new feature now eliminates the need to remember a long and complex Microsoft password and instead use the biometric authentication features of Windows Hello or your PIN.

Your personal productivity assistant now has an updated chat-based user interface where you can type or dictate requests in natural language to save time finding what you need and stay on track. For the best experience, sign in with your work or school account, join other people, check your schedule, add tasks, set reminders and more. 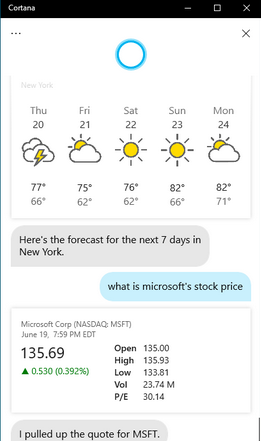 After a fit of nostalgia for Paint loyalists, Microsoft canceled its intention to remove the classic app from its operating system. While the company has kept its promise to include the app in the Windows 10 May 2019 Update, it hasn’t completely given up on making users migrate to the new Paint 3D app for their finishing needs.

In fact, WordPad and the classic Paint app are now in the list of optional features for Windows 10, joining other brands of Windows, such as Windows Media Player and Internet Explorer. This means that these applications can be uninstalled.

Virtual desktops are there to help you visually and cognitively separate the different tasks on your computer. They can also be useful for presentations – allowing you to set up demos on different desktop computers. Several users have requested Microsoft to be able to specify the names of their different desktops, in order to contribute to the separation of workspaces. Microsoft has implemented it since this release.

When you open the task view (by selecting the task view button in the taskbar or pressing the WIN + key), clicking on your desktop name will now turn it into an editable field where you can set the name which can be anything you want ( including emojis). You can also right-click on the desired desktop thumbnail in the task view. A contextual menu containing a rename appears. If another desktop hasn’t been created yet, select New desktop in the task view to get started. Note that the names persist on restart.

What do you think of this decision by Microsoft?

Microsoft unveils pricing for its Windows 365 Cloud PC service, pauses free trial after one day due to ‘amazing’ demand