NAS maker Synology recently released the DSM 7.0.1 RC. This new version of the in-house software fixes several issues and brings improvements as well. What is particularly surprising is that this is the version of the DSM in the Release Candidate. It may still contain bugs, which Synology seems to assume because they decided to make it available to everyone. Was there an urgent need to release this version? What is this hiding? Is this a new strategy for Synology? Explanations…

On Tuesday, August 31, Synology decided to provide the first update for DSM 7.0. The surprise comes from the fact that this is a copy filter release. This is not the final version yet and it may still contain some bugs (or even disappear overnight for no reason). Manufacturer NAS sometimes offers incomplete versions (Beta, Release Candidate…), but this is the first time it has made an RC version available to everyone, on its “stable” channel. This inevitably raises some questions… Is this the new DiskStation Manager release policy? The answer may be simpler. In fact, DSM 7.0.1 is the first version compatible with NAS for FS, SA, XS / XS + and DVA . series. The latter was not able to take advantage of DSM 7 and still exists under DSM 6.2.

In addition to this surprise, there are several important new features in this new version:

DSM 7.0.1 includes all the new features of DSM 7.0: +340 MB. We do not recommend installing this Release Candidate On a NAS with sensitive data. In fact, the risks are many… We advise you to wait for the final final version that should arrive in the coming weeks. 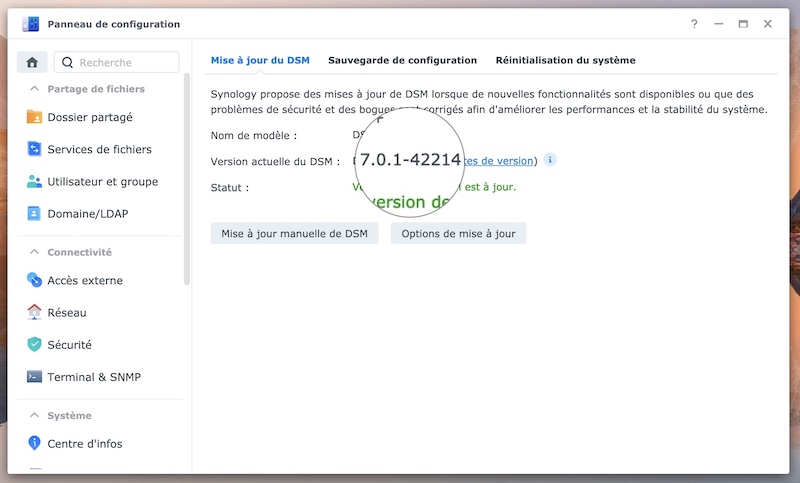 However, if you really want to install the latest update (at your own risk), know that it will not be presented to you from the usual screen (control Board > update, restore…). No, it will necessarily pass through Official website download page. Then, from the management interface, click the button DSM Manual Update. Note that the installation is a bit long (10 minutes is good) and requires a NAS restart.

To find the changelog, go to This page is in English…