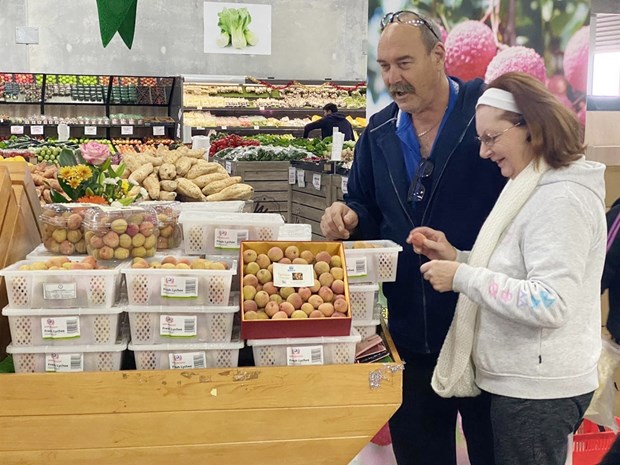 Vietnamese fruit sold at a supermarket in Australia. Photo: VNA

SYDNEY (VNA) – The governments of Australia and Vietnam on December 21 unveiled a strategy to strengthen economic ties and set a roadmap to boost trade and investment ties between the two countries.

In a statement posted on the Australian Department of Trade, Tourism and Investment website, Minister Dan Dehan praised the strategy and said it was the basis for Australia and Vietnam to double their investments. He said the two countries are likely to complement each other. The supply chains of the two countries are increasingly closely linked, meaning that Australian and Vietnamese companies can jointly export to other markets around the world.

According to him, the implementation of the strategy will benefit both parties and enhance their trade and investment relations, especially in key areas such as education, natural resources, agriculture, manufacturing and the economy.

Planning and Investment Minister Nguyen Chi Dung expressed confidence that success in achieving the common goals of the strategy would further improve the economic position of Vietnam and Australia and contribute to security, security and stability.

In contrast, in December 2020, Australia’s total investment in Vietnam was A $ 1.38 billion ($ 980 million), ranking 20th among countries investing in Vietnam. Australia has primarily invested in manufacturing, processing, food, agriculture, forestry and fisheries.

To achieve the strategic goals, trade between Australia and Vietnam will need to increase sharply more than trade with other partners, while bilateral investments should double from $ 2.17 billion ($ 1.55 billion) to $ 4.36 billion by December 2020. ($ 3.11 billion) – VNA